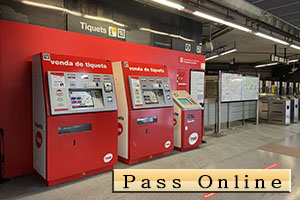 Tickets, cards and subscriptions, a ticket for each stay.
From 1 to 5 days, from a ticket valid for a single journey to a card valid for 30 days, from a long summer stay to a short weekend break in the Catalan capital, tickets for personal or collective use, from the train station, the port or the airport del Prat, adapt the Barcelona metro tickets prices to your needs.

Which package with Barcelona metro to choose ?

The subsidies introduced by the government since 1 September 2022 relating to the metro prices for a number of tickets in the Barcelona area, in order to confront the crisis, remain unchanged for the year 2023.

As a result, from 1 January 2023, the prices of the Barcelona metro will be the same for the T-Usual card (metro card valid for 30 days), which will remain at 20 euros and the price of the T-Jove card (90 consecutive days for those under 25 years old) will remain at 40 euros.
On the other hand, the 10-trip personal ticket (T-Casual) that is not subject to an extension of the discount will cost 11.35 euros.

Tickets for personal use

Integrated price : Formula that allows users to switch, up to 3 times, from one transport to another with the same ticket. Even if it must be validated at each connection between metro, bus (TMB), tram, Montjuic funicular, FGC trains and Rodalies regional trains (zone 1). Taking the example of the T-Casual, a person who goes from the metro to the tram will have used only one ticket out of 10 at the end of his journey.

Personal use cards, such as the Hola 2-5 Days card, the T-Usual unlimited travel for 30 days pass or the T-DiA ticket, cannot be shared from one traveller to another; they are single-person tickets.

Which subway ticket to choose ?

Based on the same principle as the Hola 2 days, the Hola metro card for 3 consecutive days gives unlimited access to the same transport in Barcelona as well as to terminals T1 and T2 at Barcelona Airport.

The Hola 4 days gives unlimited access to the metro, bus (tmb), tram, funicular of Montjuic as well as to the FGC and Rodalies trains (zone 1), for 4 consecutive days.
Valid for travel between the airport and Barcelona.

As soon as you arrive at the airport del Prat, set off to discover Barcelona. This card gives the same advantages as the other Hola Bcn cards, for 5 consecutive days after validation.

The single trip metro card is non-integrated ; it is valid for a single travel by metro, bus or funicular from Montjuic.
Not valid for airport terminals stations T1 and T2 (L9).

T-Casual is not shareable at the same time. Its 10 travels provide access to the public transport of the different integrated operators in Barcelona. Not valid for airport stations T1 and T2.

Designed to allow several people to travel at the same time with a single ticket, the T-Familiar is valid for 30 days. This card does not allow access to the airport terminals.

This 70-trip card, which can be used by several people for 30 consecutive days, gives access to the transport services of the operators included in the integrated tariff system, as well as airport terminals T1 and T2.

The T-Usual, valid for all your travels during 30 days in the transport of the integrated operators as from its validation, is for personal use and gives access to the stations of the airport.

Valid for 3 months from its first use, the T-Jove (personal) offers the under 25s an unlimited number of trips. It provides access to terminals T1 and T2 of the airport via metro line 9.

Except for holders of the Hola bcn, T-Dia, T-Usual, T-Grup, T-Jove, T-16, Targeta Rosa or T-4 cards, passengers must have this ticket to travel between the airport terminals and Barcelona.

A 2-trip multi-person card, to be used on the same day, designed to give citizens an incentive to switch from car use to public transport on air pollution days.

The cards T-Casual, T-Usual, T-Familiar, T-Grup, T-Dia, Hola 2 Dias, Hola 3 Dias, Hola 4 Dias, Hola 5 Dias, give access to the Barcelona Metro, Tram, Metropolitan Buses of Barcelona, as well as to the urban lines of the Ferrocarril de la Generalitat and trains (Rodalies) of the areas you choose.
Hola Bcn cards allow you to use public transport for 2, 3, 4, or 5 days even from your arrival at Barcelona airport.
To buy Barcelona metro tickets, you can choose between the vending machines in each metro station, in tobacconists and newsagents in the streets or buy Barcelona metro tickets online on the official website tmb.cat.
The ticket machines in the Barcelona metro are equipped with a voice assistance system and Braille reading for visually impaired people to guide them during the purchase of tickets.

By leaving your finger on the upper right-hand side of the display for about 3 seconds, the visually impaired person's assistance system will turn on and guide them step by step.
The acquired ticket has a semicircle at the bottom left of the map (facing you) as a marker. 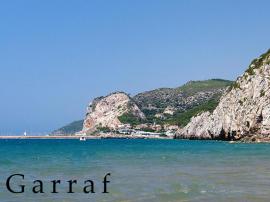 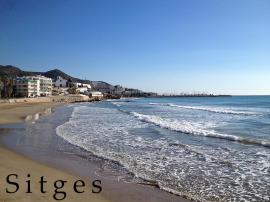 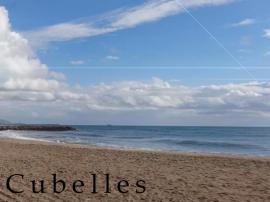 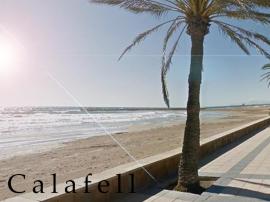 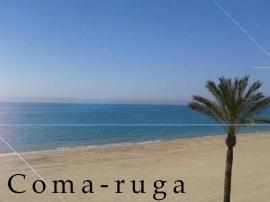 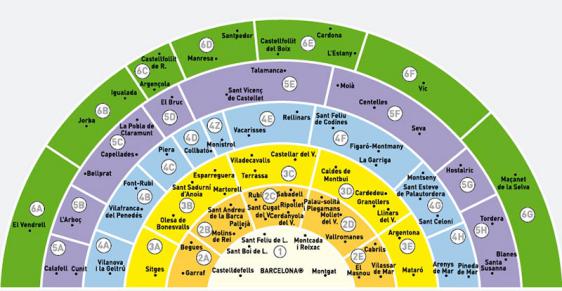 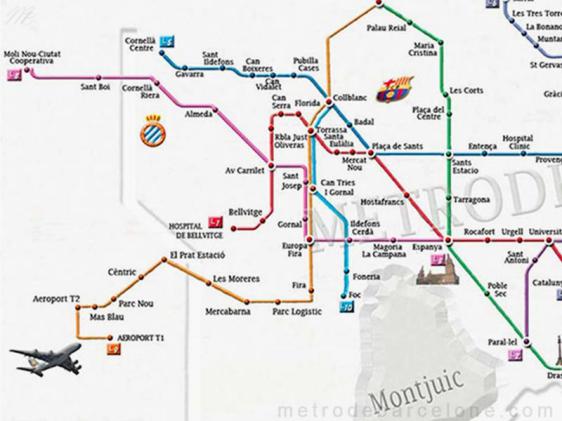 Ideal for exploring the city's most beautiful squares and monuments, the Barcelona sightseeing bus allows you to get on and off at the foot of each of Barcelona's must-see sites.

Accessible via the Parral lel funicular station or from the port via the Drassanes metro station, the Montjuic cable car takes you to the heights of Barcelona to admire exceptional views of the city.

How to visit Barcelona by metro ?

Airport shuttle included, this package includes unlimited access to Barcelona public transport for 2 to 5 days, an audio guide for smartphone, as well as 10% discount on many attractions ...

Ideal for a weekend in the Catalan capital, the 48-hour Express card offers unlimited travel on Barcelona's public transport (metro, tram, bus, funicular ...), as well as impressive discounts on many tourist attractions ...

In addition to free, priority and discounted access to many of the city's tourist attractions, the Barcelona Card includes unlimited access to Barcelona's public transport (metro, bus, tram, trains, funicular) ...

Which tickets and passes to choose ?

2 day itinerary in Barcelona, which ticket to choose

Ideal for a 2 days tourist itinerary in Barcelona, this metro card is valid for 48 hours and gives unlimited access to Barcelona's transport system (metro, tram, TMB bus, FGC train and Rodalies trains. The Hola Barcelona 2 days allows you to travel to Barcelona airport.

How to get around Barcelona for cheap

Can we use the Hola Barcelona card from Barcelona airport

All the tickets available in the vending machines will give you access to the metro of Barcelona as well as to other means of transport such as streetcars, buses and some trains. However, the access to Barcelona airport via the metro is not possible with all the metro tickets. The cost of access to one of the terminals of the airport is 5.15 Euros, prices already included in the following cards (Hola bcn cards, T-Dia, T-Usual, T-Grup, T-Jove, T-16, Targeta Rosa and T-4).

To access the heights of Montjuic, take the funicular that you can find in the Paral-lel metro station ; the funicular will lead you halfway between the paral-lel metro station and the Montjuic castle. The Montjuic funicular ticket price is the same as the metro ticket ; with the transport ticket you have already bought to travel with the Barcelona metro, you can ride the funicular of Montjuic. At the exit, when it drops you off at altitude, you are at the foot of the cable car from which you have the choice between go up towards the castle (Barcelona Military Museum), or go down to the old port of the city.
The first stop of the Montjuic funicular also leaves you in the heart of Montjuic Park, a few steps from the Joan Miro Foundation.

What is the ideal travel pass for a family visit to Barcelona ?

What is the ideal card to use the metro in Barcelona with your family is a good question whose answer will depend on the duration of your stay.
- If you are only in Barcelona for a day, take a Dia card per person, which allows you to take as many metro rides as you want.
- If you are in the Catalan capital for 2 days, the time of a weekend, opt for the Hola 2 day card, and you are free to move around as much as you want ; moreover this card gives access to the terminals of the airport of Barcelona.
Remember to calculate the number of days and people because a Familiar card of 8 trips can also be interesting if you circulate very little ; see also a T-grup that allows to share 70 trips.

Where to buy metro ticket Barcelona

Can you buy metro tickets from Barcelona airport ?

In fact, Barcelona metro tickets are available in the vending machines upon arrival at the metro stations of the T1 and T2 terminals of Barcelona airport.

The Golondrinas provide sea excursions from the old port to the beaches to discover Barcelona from the seaside in small boats for 40 minutes or an hour.

With more than 99,000 seats, the FC Barcelona Stadium is one of the largest stadiums in Europe. Come and experience the Camp Nou atmosphere.

The Sagrada Familia, the most popular and visited monument in Barcelona, is one of Antoni Gaudi's wildest architectural accomplishments.

Casa Milà, also known as La Pedrera, one of Antoni Gaudi's masterpieces and a UNESCO World Heritage Site, is a huge house that has no right angles at all.
Barcelona Casa Mila 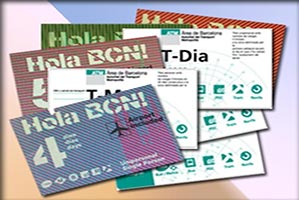 Barcelona metro fares for each type of stay. Weekends, holidays, alone or with your family, you'll have no trouble adapting your ticket to the different routes you need to plan in order to discover the most beautiful squares, monuments and other must-see places in Barcelona.