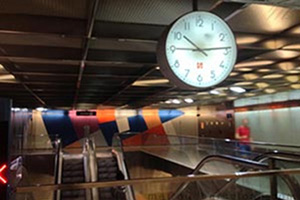 What time does the Metro start and close in Barcelona ?

Barcelona metro hours are very well suited to all those who prefer simplicity and speed to travel around the city of Barcelona from one point to another day and night.
The Barcelona metro is open non-stop from Saturday to Sunday, which allows you to enjoy the exceptional atmosphere of Barcelona by night in all corners of the city, such as the port, and be able to get home on time.

Barcelona metro hours from Monday to Thursday and holidays

From Monday to Thursday and holidays, such as New Year's Day (1 January), Pâques Monday, Sant Joan (24 May) or 11 September for Catalonia's national day, the Barcelona metro timetable is the same every day.
The metro starts running at 5 a.m. from one of the line's terminals until midnight.

On Fridays and the eve of public holidays, Barcelona metro operates from 5am until 2am the next day.

On Saturdays, the Barcelona metro opens at 5am and remains in service until Sunday night at midnight.
The metro runs non-stop all night from Saturday night to Sunday.

On Sundays, the metro continues its uninterrupted service from Saturday night to Sunday, closing at midnight on Sunday night.

On the occasion of the festivities in the Gracia district, the Barcelona metro service starts at 5 a.m. and remains uninterrupted all night.

On Christmas Eve, 24 December, the Barcelona metro timetable runs from 5am to 11pm.

Beginning and end of service


At the end of the Barcelona metro service - 2 a.m. on Fridays and the eve of public holidays and midnight from Monday to Thursday as well as on Sundays and public holidays - you can continue your journey by public transport in Barcelona thanks to Nitbus. All the lines of the Nitbus network, with the exception of the N0, pass through Plaça Catalunya.
Between Barcelona and its first metropolitan area, the night bus network is made up of 17 lines that serve the municipalities of :

From one tourist site to another, which stations, connections and colours to choose among the twelve lines of Barcelona's metro network.
Choose one of the following pass and make the most of your stay in Barcelona

With audio guides in about ten languages available, the tourist bus is an excellent way to discover Barcelona and its must-see sites on its various circuits.

From Montjuic Park to the Barceloneta neighbourhood and its beaches, via the old port of Barcelona, the cable car offers a tour of Barcelona from the sky with exceptional panoramic views. 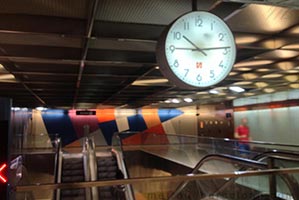 From Monday to Sunday, 7 days a week, the flexibility of the Barcelona metro's schedules makes it possible to move from one point to another in the city every day of the week, including Sundays and holidays. Check now how to adapt Barcelona metro timetables to yours.